Scanner characterization (free) to correct the colors in scanned pictures

I'm working to get my non-digital life in order by scanning in the large underbed box of photos that I've accumulated, but I've noticed that the color isn't quite right on the scanned images. The scanner "autocorrect colors" checkbox doesn't seem to help. I figure the best way to deal with it is to scan the pictures without any scanner-based color correction, and then apply a proper color modification to the resulting image. But the challenge is in 1) convincing the HP "easy scanning" junk to just give me the bits, and in 2) mapping the colors that the scanner sees to what's on the print.

Now, I could spend $60+ on a standardized color card, and use an expensive program to generate a color profile that could be applied to make the correction. But come on, it's just software. Instead, I am sending a color card I generated to the local Walgreens.com in-store pickup, and I'll use that to characterize the scanner. There's a toolset called Argyll that seems to do what I want, but it's not exactly the clearest documentation for someone who doesn't do digital image workflow for a living. But here's what I've figured out so far:

There's a zip of Windows executables. They seem to run on my Win7 laptop.

First, we generate a "target".

Second, we turn this ti1 file into a TIF image (and at the same time we make a .cht map of the image that the tool will later use to recognize the image)

Third, since Walgreens only deals in .jpg files, I convert it to a 100% quality jpeg via GIMP. And I end up with a 336k file to have printed. 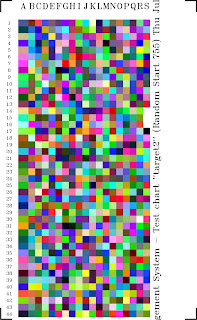 And now I'm waiting to pick up that picture.

Before I found the Argyll software, I had grand plans of figuring out the formulas to do the transformation myself in gimp. I made my own blocks of color, got them printed, and discovered that the transformations required to map the resulting RGB values to their originals was, well, let's just say complicated. Probably there is an easier formula in some other color metric (HSV or CMYK or something) but that's a lot of work to figure out.

My next attempt was with Argyll, but I thought the hexagonal color pattern was nicer than the color bars that come out of the default TIF. Unfortunately, Argyll won't create a CHT file to recognize the hexagons. So that was another $0.20 wasted. Oh well.

Some other blogs I"ve found useful